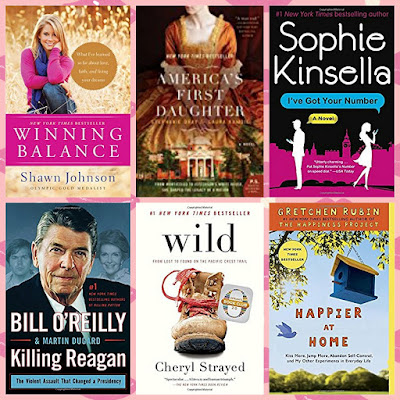 Just when I thought January might go smoothly…it so didn’t. While we kicked off the new year with a bad virus or four, every member of the family got sick, I lost hearing in one ear for weeks (still don’t have it back completely) due to an ear infection, lost my sense of smell for a week, and Sylvie regressed even more than normal in terms of sleep because of her sickness. We made two trips to the doctor this month, but only one was not scheduled.

On the bright side, all of this illness and lack of sleep translated into a lot of reading on my part to help pass the time while rocking my baby and getting her back on a schedule with some gentle sleep training. Sooo, I’m attempting a quick review of the books I read in January. They encompass many different styles and while I think there may be something in here for everyone, I’d be surprised if any of you were to enjoy all of them. I didn’t!

This book was, for lack of a better word, a sweet read. I love Shawn Johnson. She encompasses a few different things that I adore–Iowa, gymnastics, the Olympics, and a down-to-earth personality. Winning Balance starts at the beginning, with her birth and childhood, and hits an unnerving climax at the Bejing Olympics. It delves into her training, her fame, and career through Dancing with the Stars (a section I thought I wouldn’t really enjoy, but it had some interesting surprises). It was a nostalgic read for me, because I remember watching her in Beijing, and especially the flood that occurred and destroyed her home gym during that time. It’s written in a youthful and introspective voice, with a focus on holding to her positive outlook and faith even when her dreams aren’t realized. It was sweet and a little inspiring and made me even more appreciative of this athlete/girl-next-door who is literally “next door,” as she’s from Des Moines. 🙂 There were several fantastic quotes that started off each chapter, and I found myself saving some of them in notes and texting a few to Ry. I’d recommend this for a pre-teen or teen girl any day. Or myself, when I’m looking for a quick and lighthearted read.

For me, this was undeniably the best book of the month. It’s a historical fiction account of the life of Martha “Patsy” Jefferson Randolph, the daughter of Thomas Jefferson. It’s beautifully written, with a staggering attention to historical accuracy and true-to-life facts, thanks to the many letters that both Patsy and Thomas Jefferson wrote. The contradictions of campaigning for slaves’ freedom while owning slaves, the struggle of a life of politics and high ideals, secrecy, loyalty, romance, two revolutions and two countries (France and the U.S.), lend plenty of enthralling material to this book. I kept thinking, “HOW am I only through a third of the book? What more could POSSIBLY happen???” because it felt so dense with plot…yet this novel is first and foremost character driven. There’s a chapter at the very end of the novel that delves into the authors’ research and details on which parts were “alternative facts” (hahaha!) that, even though imagined, were highly plausible. That’s why I’d recommend staying away from Google while you read, as a majority of your questions will be answered in the end. I’m planning a trip to Monticello right away, of course.

Accidentally going with a presidential theme, my next book was Killing Reagan. I never thought I’d be one to pick up a book by Bill O’Reilly per se, but it was recommended to me. Killing Reagan is a biography of the president, with only some attention to his would-be assassin, John Hinkley Jr. It’s well written, giving the reader what feels like a true inside look at the man who presided over my childhood. 🙂 It’s honest and didn’t idealize the president or the first lady at all, but humanized them in all their faults. This was a fantastic read that really helped me understand the politics of my youth. It even enriched my viewing of the inauguration, as some of the traditions of the changing of hands were mentioned in the book. (In a Bing Crosby voice, I have to ask, “What can you do with a president, when he stops being a president?”) If the subject interests you at all, I recommend this one.

Well, this one was just a mistake. For me. I do love artfully written memoirs, and this one qualifies, and I loved the premise of the story–she hikes the Pacific Crest Trail and has many…adventures. BUT, this one was just not my style. I cringed through was was basically one long tale of self-destruction. Most of the narrative takes place off the trail and takes the reader through Strayed’s loss of her mother and (spoiler alert) affairs, divorce, drug use (heroin), plenty of casual hook-ups, and an abortion. It’s not that I didn’t feel some sympathy for the author or have forgiveness for her choices, but it was the way they were all addressed. I didn’t feel like this was someone who could really draw me into her thought process with the perspective of wisdom or redemption (even in a secular way) gained after deciding to treat herself better. It was just a tale of a woman with little self-esteem and seemingly few regrets. Even her choice to hike the PCT is a bad one, as she does it with almost zero preparation and suffers greatly for it. The hike itself offered very little in the way of “finding herself,” though that’s how the book is marketed. For all the crap she indulges in, there is not enough payoff in the end. (Also, language alert!) I did finish it, if you count skimming. So, anyway, though I’m sure thousands of people would disagree, I don’t recommend this book!

Next, I needed a good story that had nothing to do with real life. Sometimes you just need some chick lit. Sophie Kinsella is a British author known for Confessions of a Shopaholic, but I’d never read any of her books before. This one takes place in London and follows the life of a good-hearted physical therapist named Poppy who has just misplaced her engagement ring…and her cell phone…and picks up a phone in the process that takes on a life of its own. Poppy goes through a series of hilarious mishaps and I had a great time finding out how she was going to get through each encounter with her fiance and his family. This one is light and truly funny, with a sweet mix of romance and character growth, plus it was filled with–my favorite–FOOTNOTES that act as asides and explanations from Poppy on a number of distortions of truth or blanket statements. Because of the footnotes, this was awkward to read on Kindle, so I’d recommend checking this out in print form. It’s not a Christian romance, and there was a tiny bit of language, but nothing that made me uncomfortable, just FYI. This one made me smile.

Ahh….this book is awesome. AWESOME, I tell you! Funnily enough, I’ve never read The Happiness Project, which I’m sure I’d like. But this was easy enough to pick up and read without any experience with its predecessor-bestseller. I love Gretchen’s approach, which is full of deep thoughts drawn from fantastic sources on every angle that helps bolster her new focus of happiness projects: The Home. Gretchen takes a school year to make improvements in her home, including these areas: possessions, marriage, parenthood, interior design, time, body, family, neighborhood, and now. I really appreciate that she’s a Christian, a thinker, and a doer who is using her own experience to inspire others. It’s a relateable book about the struggles and triumphs of daily life that so many of us moms can appreciate. Even though I’m technically not done with this book (oops, should I have saved it for February?), I wanted to include it because I fully trust where the author is going. UPDATE: I do still think this book is awesome and would like to some day own it, but I think it’s best to read in smaller spurts. Sometimes it gets a bit tedious to be SO inside the author’s mind, as she talks about her plans quite a lot sometimes before implementing them.

So, those are all the books I read this month. I have no idea if I’ll do much reading in February, but if I do, I’ll try to include another review at the end of the month again. I never really know how much time I’ll have.

If you’re wondering how I got all these books, I actually wrote a little guide on checking out e-books through your library’s online database. I’m a nerd that way.

For all three of you blog readers out there (hee hee), leave some book suggestions for me to read next month in the comments!